Many times, I am trying to resolve several basic or complex Maven /  Java EE  project structure issues, on my day work. In order to provide the solutions,  I often end up   experimenting with the project structure, test my deployment on different application servers and fine grain my configuration.
Maven can have a steep learning curve for newcomers and if you add in the mix the 'sometimes' complex configuration requirements of a modern Java EE application, the things get more frustrating. I have also seen in my career, that lots of junior java developers, when they join a big team or project, most of the times the project structure is already fine grained and configured for them by more senior members. They assume that it works, and they dont spent time to understand the wiring and configuration. I have done this mistake myself in the past. They are being assigned simple coding tasks and they deep dive on requirements but unfortunately they forget  to study  the application structure.Their senior colleagues forget as well to train them on this particular area, most of the times due to time restrictions. This may lead to accidents when people start messing around  with the structure of the application with no previous experience, while trying to 'make it' work. Maven and it's conventions aim to help a lot on establishing common structures and conventions on how a project should be structured, but the again you need to understand the tool, the conventions and finally master your 'configuration'.

You can often hear someone saying 'I added this library there and it worked', if you reply 'define there', then you might get some interesting answers. Sometimes by accident or luck it works but in a complex multi-module application, most of the times 'it just works' is an  understatement and problems will start appearing soon enough.

This series of posts is targeting Maven and Java EE newcomers mostly, but feel free to share or use it as a demo if you are a more senior developer. I am going to 'attack' on a demo basis some real problems I happen to discover from day to day work and try to provide solutions while providing a basic explanation or links to related resources. Please feel welcome to add comments, corrections or references for something that can be performed / completed in a far cleaner way. The best way to learn Maven and create a 'complex' but easy to maintain application is to start from scratch, empty pom files.

The  main message I am trying to pass along to junior developers reading my posts is that 'studying' your application structure, asking about the underlying build tools is part of your work and you should never assume that someoene else is always going to take care of it. It is also a stepping in order to challenge more difficult tasks and improve your skills as a Java developer.

Core technologies to be used

My application is going to be an EAR, for this particular post,  this ear is going to include 2 top level modules a war and an ejb-jar. There is also going to be a jar, that will contain the classes that will be my database domain model (JPA entities). I am going to expand the structure adding more resources in future posts. A very abstract image just to give an idea, illustrating what are going to 'include in our ear'. The war module in the future will contain servlets or jsf compoments, the services module is going to contain a set of common Stateless Sesson Beans (or Message Driven Beans). The domain project is going to have plain Java classes properly annotated with JPA2 constructs. 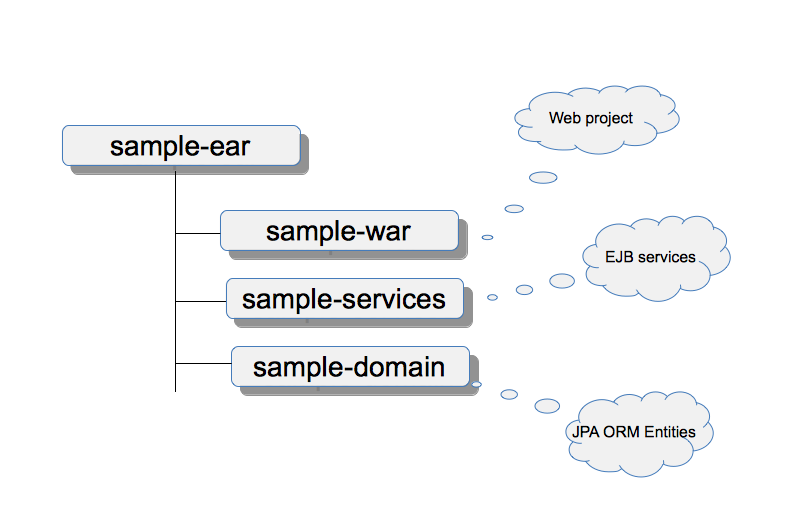 Composing the basic structure of our application using Maven

In order to build the ear above we need to define modules and the parts of our application, using Maven which is anyway our building/packaging/configuration tool. This is one of the most steps and if you get this from the start then the rest will be simple technicalities or configuration specifics. What I am proposing is not the ultimate solution but something very close to the standard which is most of the times the 'way to go' if you start a new app, so no funcy specifics here, let's follow the standard and start building on a concrete foundation.

So let's forget the image above at the moment and let's think Maven, what and how many modules may define, how to interconnect them and define dependencies. Note, my proposed way of work is the standard but it is not the ultimate solution , meaning you can achieve the same results by packaging your application as an ear, define fewer modules and dependencies. Let's assume that I want to cover highly complex structures so I will define a generic structure, always following the standards.

I assume that you have covered some basic stuff from Maven and you are at least familiar with the terminology.  If not have a look here.

Remember Maven is about, placing your files to the right places according to a well defined structure , and defining the maven plugins, which are some kind of tools to do specific things compile, package, copy files, etc. The plugins are being invoked by Maven, so yes again you need to define the plugins to the correct place and with the appropriate configuration. You are not writing your make or ant scripts, you just 'insert' plugins and ask maven to execute them in a well define order.

As good ex-colleague of mine (wrote in a email recently), it is good to break conventions in your life and in your coding, but never with Maven. He is right :) .

If you are not sure how to install maven, have a look here Windows  or Mac

We are building with Maven, so we need to think in terms of maven pom (s) and modules. In order to create out required ear packaging (see above) we need 5 poms 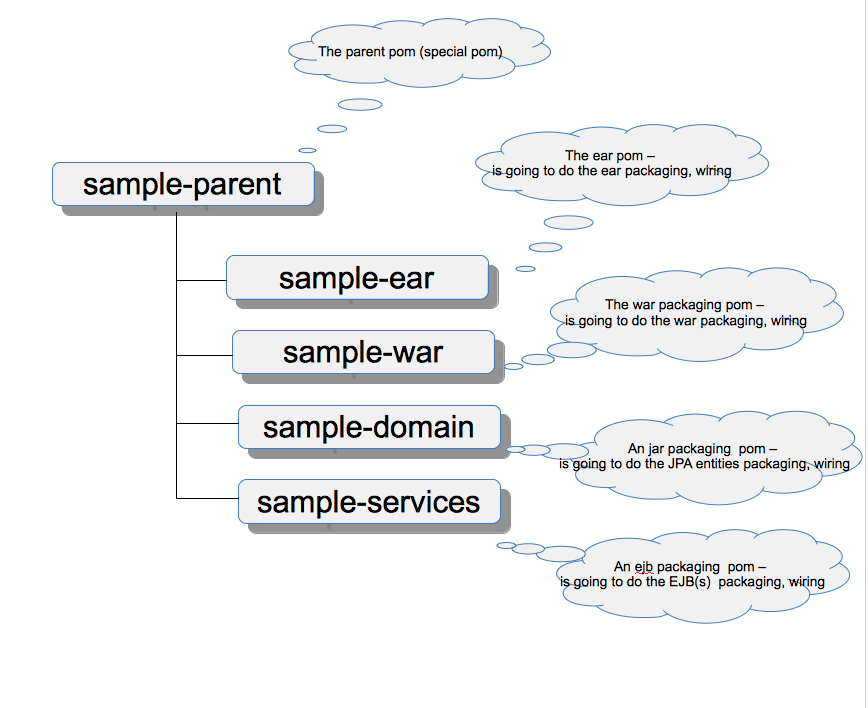 As you can see, every module has it's own pom, and there is the parent, one of the things that still lot's of people do not add in their structure, assuming that they don't need it, since their project is small, and the after a while while more modules are being added, you end up with havoc. So make a note here ' the parent pom is really nice to have and configure'. This is the pom where you define all your dependency versions (that is libraries) and you configure the maven plugins, so that all the child poms, inherit a common configuration.

As I have already elaborated we are going to start from scratch, so I am creating a new folder called 'sample-parent' and in this folder I add a new file called 'pom.xml'.

Yeap not excited, just make note on the  packaging element which is defining 'pom'.The parent is called parent, because it 'defines' and manages the children modules, this is done in the modules definition section. Our original pom becomes something like that. That means that we must create the related folders under our sample-parent, and then add a pom.xml to each one of them.

Let's continue adding some more configuration...
This is an important section since we define versions for

Let's add after the properties section, another important one, the dependencyManagement .This is where we will define the dependencies and their versions that can be potentially used in our application modules. In this section we actually care about the version, the inclusion or exclusion of the dependencies it is up to the child pom (meaning they are not added automatically), their scope as well. So the DependencyManagement section is the one to control, in one central place the versions.

Another last but important section in our parent pom is similar to dependencyManagemt is called pluginManagement, and is the section where we will define, the versions and common configuration of all the maven plugins that are going to referenced and used during our application configuration and packaging.In the sample below I have defined one of the most basic, the compiler plugin, but of course I am going to need more!

You can  download our minimal sample here (tag post1, bitbucket). At the time being, it seems that we have not completed anything, but eventually defining a clean and concrete parent pom, is going to be the basis for the rest of the work we are going to do in the upcoming posts.

Points to study
Continue to part2