Back into gaming / flight sims and PCs - entering the NUC world 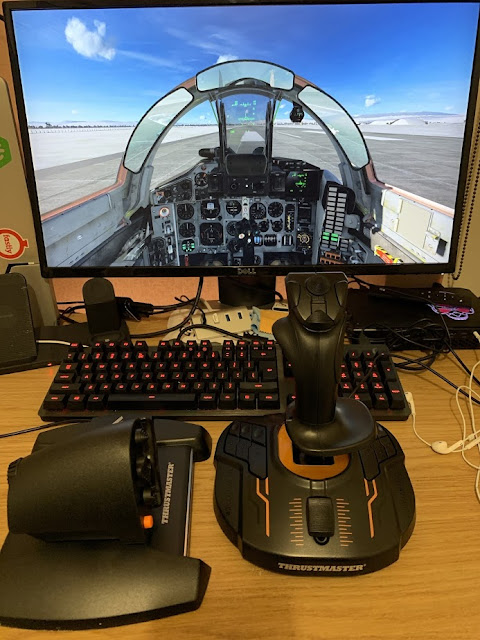 I started as a PC user back in the days, Windows user specifically. I can still remember my self assembling PCs, reading magazines being an expert on motherboard trends, CPUs, heat sinks and all these stuff. I can also remember my self configuring all flavours of Windows...and almost 14 years ago I quit. I had enough. I switched to Apple's computers and never looked back. Well...sort of. As a professional when I switched to Apple's MacOSX and Apple's hardware I felt bliss. Yes there are some fck ups here and there, yes MacOSX is not being evolved or keep up but still is a pretty solid OS along with some pretty solid hardware the combination is pretty good. Currently I can not see how I can switch to another platform, even though I have been closer and closer to Linux over time. One thing that I missed when I moved away from PCs was gaming. I am getting old and I am this type of guy that believes that all games should be played with a keyboard and mouse :P . Yes I have a PS4 I tried several times to convince myself that playing Call of Duty on PS4 is the nice and while the graphics are not bad at all, I miss the comfort of my desk, my desktop screen and the A-S-W-D combo! So occasionally  I would tap back in to the PC world, either assembling or kind of buying some half baked tower, so that I can enjoy my favourite games. When I was too busy I was kind of forgetting of this PC and when I had some spare time I would try to re-install some flight simulator or a new version of CoD. The thing is that since my PC was not my main machine it was always considered a side-kick a nice to have. No upgrades no love nothing.

Definitely my free time is not improving but I could find my self spending considerable amount of time watching on YouTube videos of this flight simulator (its hardcore) called DCS. Specifically the videos here and here, where they get to explain what is going on + the graphics. Ooh my, I was hooked. Flight simulators were always my soft spot, I still remember trying to read the F-16 manual from Falcon 3.0 . After some time watching and watching this little daemon whispered in my dreams - you know you should buy again a PC. But... I gave away the previous one I replied, I was not using it is going to be a waste. 'No you need it..you need to try flying a Mig29 or your favourite Mirage2000'. Oh well, yes I need it! I need all the things kind of thing to be able to play this flight simulator and start dogfighting (so little I knew).


What kind of PC?

Obviously, I did not want to go into the lets build or configure a proper tower. I had actually gave away my beloved iMac, to my father back home. So the idea of bringing a tower back to my desk was a no go, also there is no space. Renting a flat in London does not allow you to expand in terms of things to have you should always prepare for your next move, until you manage to buy or secure a flat that you can consider your own! Anyway, no towers, no prebuilt stuff from regular home PC vendors so what do we do? This is where I started reading about NUCs.  Intel's form factor bare-bone mini PCs. I was super excited. I remember their early days where the whole scene was most about small machines but totally underpowered. After all I wanted to play games mostly and already had a mini PC (some Chinese brand using it as a TV sidekick).  It seems that there are lots of different brands and options if you want to enter this world of small but powerful machines. Actually some of them can be used as servers and business operations. Have a look here for example.

Still, I was into 'I want a small powerful machine but I dont want to spend a lot of time tuning it'. After all I was like, ok I don't have enough time, I am not going to spend all my free time on configuring the machine I want something that I will just install the game and start playing (little I knew again lol).

I've watched some YouTube reviews and was kind of impressed, I was like ' yes this is it'. I did try to check on other offerings kind of get a base NUC skeleton and then configure it but mentally I was on this path of  'Get me something that works out of the box' . So I opted for this - Intel Hades Canyon . 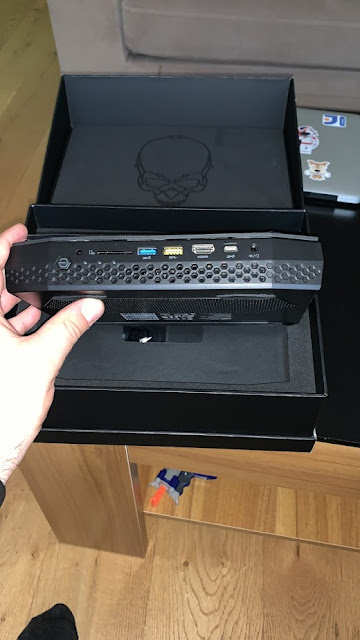 It has a pretty interesting hybrid CPU/GPU  combo  specifically this, that would make hard core PC users or gamers go like 'No don't do this, you can not upgrade etc' . Valid comments but I felt like is good enough for my needs, after all my flight sim of choice was not the most demanding game out there. This iCore7 + Radeon Vega combo performs very well on the majority of games that I tried till now and obviously is doing very well with my flight sim. 32GB or ram gives plenty of space + 500 GB SSD is also enough for me.

The very first day I switched it on, I was a bit shocked by some weird noise from an internal fan, but soon after I did upgrade the motherboard BIOS and drivers it was gone. The machine is actually pretty silent but obviously there will be times if you push it that you will hear it roar - which is totally acceptable. In terms of size is actually 1/3 ? of your PS4, so it feeds under your screen on in your desk. It looks like an old school box for your TV from the 90s.

Overall I am super happy with my Intel NUC and its performance, the one thing I can not stand (apologies I am bit biased) is the operating system. Over the years I have totally disconnected from the MS Windows scene, I used to know all the menus and shortcuts and utilities now I am like finding my self googling 'How I can apply a Windows 2000 or Windows XP theme to Windows 10'. I don't want to be negative, anyway I am not using professionally Windows for the past 15 years so I really don't know if the OS got better (I guess it did? kind of?) but at the same time I don't feel like spending time and energy exploring it further. The only thing that I have on my bookmarks is this upcoming upgrade to Windows 10 with this new native Linux kernel support - WSL 2. Maybe Windows can be the next MacOSX, if they totally embrace a ****x kernel and a better UI , who knows.

DCS time...time to fly...we more or less time to read

So the PC was ready, the game was installed and then it was time to fly. Even though I had watched a significant number of videos and reviews I had not totally grasped how complex it is to engine start a fighter plane, or fly it properly (without stalling and crashing within 5 minutes) ...needless to say how difficult it is to dogfight. My first problem was that I thought I knew how to fly a plane (on a simulator). I was wrong, it is much more complex and the amount of work that a fighter pilot has to put, especially on 3rd generation fighters is a lot. So instead of playing I actually found my self reading about Basic Fighter Manoeuvres, GPS and ILS landing, missile capabilities and radar tracking modes!

DCS as a game (its core) is totally free and it comes with 2 fighter models pre bundled. But when you get to see the videos you will see that most of the cool fighter jets that you grew up with are modules that you need to purchase online. Some fighter modules are bundled in 1 offering (see Flaming Cliffs bundle) Well let me tell you its totally worth it, I still remember when I bought the Mirage2000 module! I was so excited. Finally a very realistic model of my favourite fighting machine. The funny part is that I never managed to start the Mirage within the first week, I had to watch 3 different videos and manuals so that I start the engines properly and initialize the INS ! LOL.

After some days and since I opted to fly  the Mig29-S and the SU-27/35 I managed to get better, but there is always a but. Once I started to understand how to navigate in the air, how to kind of land and how to kind of follow orders from the ATC, it was time to dogfight. I did not dare to go online, I tried it once and I was shot down within 30seconds of fly, some AMRAAMs were fired from people on the server and I was like dead..my Radar Warning System went crazy when I entered the server and then booom!

But is to be expected, thankfully the game has a PVC mode and several missions so I could sit back and train with the computer as the enemy. After some more days, I realized that it was impossible to dogfight using only the keyboard and keys. Some moves were almost impossible to make them using the Up and Down arrows, so this led me to the next purchase. 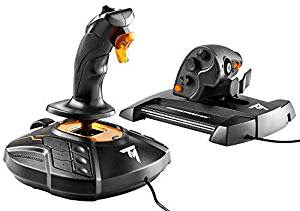 
I managed to resist my temptation to buy something more complex (I always do that and is bad). So since the game was complex and since I really needed a basic joystic and throttle to automate my workload I red through the different forums. It seems that many people suggested to start with an OK and not over complex combo like the Thurstmaster 16000M which is more than OK not only for noobs but for more complex scenarios. I did not buy the (pedals) which is fine, but once I wired the joystic and configured the throttle and the 16 differrent buttons, wow it was like playing a different game!

For the first time I managed to escape a dogfight 6 o'clock lock from an F-14 by performing some basic overshoot moves and shot it down with my MiG-29. I managed to get the tail of an F-16 with my Mirage (fck yeah) . So yes if you want to go into fighting with DCS then you will end up buying a combo. The quality is more than fine and the number of switches is more than enough for you to configure. Currently I use more or less half of them.

It all started from watching youtube videos, sparking again my flight simulator love. This led me to PCs once again which was kind of fun. I think spent more time reading about on how to actually fly a plane rather than dealing with the PC or Windows or anything else and this was a success. If you are into flying and you really want something that is more than a game I definitely recommend DCS!