So, Devoxx Uk 2017. For me its  a 10 year anniversary for one of the best European and now global developer conferences. I still remember my first 2007 Javapolis at Antwrep, its the conference I got to meet and get in touch with the broader Java community and people like Stephan J. The conference that I managed to meet the father of Java and many other Java Rock stars. The conference that I got to meet my wife (yes true story!)- a java developer as well :). So today as a Java family, living in London, we attended Devoxx UK 2017 for the very first time.

First of all you can judge the quality of the conference, from the amount of t-shirts and gadgets you managed to collect by your first day. As you can see, Devoxx UK was a great success : ) . 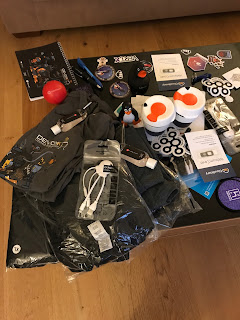 The event takes place at the Design Business center in Angel , we got so lucky because we live just around the corner so it was an easy morning walk. Really impressive place, even though, I still prefer the cinema's. Some of the rooms (not all of them) were not sound proofed and in some cases when you are seating in the back you could not see the speaker. Also if you are used to cinema like chairs and auditoriums going back to conventional conference centers feels a bit weird. But anyway it was not that bad, maybe we are just spoiled by Devoxx :). I hope Devoxx-UK grows more and then they can 'rent' cinema rooms next year : ).

Talks
That's all for today!!! Greetings from London : ) .