Email ThisBlogThis!Share to TwitterShare to FacebookShare to Pinterest
Labels: jhug

Is your codebase smelly? Find out with the help of SonarQube and the Smells plugin!

In the project which I recently joined, I discovered a set of annotations, (part of the code) that eventually did not add any functionality but they were 'marking' classes or fields  as a potential bad implementation, or as a potential case that may need to be reworked. The original author, had created a very elegant way (imho) on annotating parts of the code, for things that needed to change or to be improved. This mechanism was mostly targeting less senior contributors so they improve and at the same time, it was marking 'smells' in the code that unfortunately were not a 5 minute fix and might need a bigger change or discussion around it.

@TechBebt ("rework this method, so that takes care this business concern")
@Refactor ("Use the proper data structure for this operation, see LinkedList");
public void doSomething(String aParam){

In the past I used to work in projects where this kind of code-review and comment process was performed using our famous following comments. You might have some of those in your project I guess.


I really liked the annotation approach, so since I am new, I started searching for them all over the place. When I found something that I could fix, I followed the annotation's description field, and I could provide a small bug fix. It seemed to be a bit cleaner than the long sentenced TODO items. The problem with the above annotations is you will bump into them, only if you happen to see them, or search for them in your IDE, where TODO or FIX-ME usually show up in IntelliJ's or Eclipse's task (todo) list.


At the same time, I proposed to install Sonar for the team and eventually monitor the 'health' of our code base improving the exposure of this information to a wider audience. The more you expose your code problems to the team, the easier you make this information to anyone, the more chances you have members to contribute fixes rather than dictating it as a process.


While I was configuring Sonar, I discovered the Qualinsight Smells Plugin, along with their maven library. Eventually it is a library that contains similar annotations to those I discovered in the project, so you can add it as a dependency in your project and start 'marking the smells'. These annotations then can be scanned by the related Sonar Plugin, so when you code base is scanned, in the final Sonar report, you can have a list of  all the annotated 'Smells'. You can go through the simple documentation on github. A smell annotation looks like this:


You have to indicated
You can find an example of project configuration here.

When the Sonar report is ready, the smells are going to be listed , as the image below illustrates.

I really liked the overall approach. Despite the fact that our ultimate goal is eventually to fix the code and only 'annotating' defects, I still think it is a very elegant idea. Especially when your team consists of less senior developers or 'devs' that they don't pay attention to things like quality and maintainability of the code base, it is a very 'constructive' and elegant way to bring forward these concerns and with the help Sonar, increase their exposure. It is also a team effort, identified Smells are not predefined rules from findbugs or PMD, they are human identified  points, there might cases where the code is fine, but it does not implement correctly the business.  Sonar enables non technical stuff to eventually have access to the 'state' of the project, so yet another way the product owners/ managers to a better understand about 'technical debt'.

So...is your code base smelly? If yes do something about it. Nobody likes smelly code. 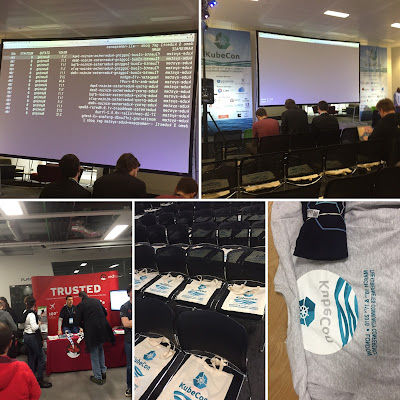 I 'fell in love'  with Kubernetes, a year ago, during a day job research initiative around containers, micro-services, orchestra-tors and platforms as a service frameworks. I'm not a sysadmin, neither an OPs guy, I am a developer. I like to write code, design software, improve them, refactor them, re-architecting them.  From the developer's perspective kubernetes is eventually the right technology  (IMHO) to abstract many of the challenges of a micro-services based architecture, at the same time is easy to learn at least it's main idea's- without being sysAdmin Hulk.  Last summer,  when the first KubeCon tool place in California, I was telling to my self ' Man I wish I was there, it would be great to be in a conference for a technology that is in it's infancy and is picking up'. A few months later, KubeCon EU is announced and I registered no matter what.

A few months forward, I am sitting happy enough on a big room, along with other Kube-nauts, waiting for the keynote talk by Kelsey Hightower, who I was very happy to meet in person and ask about the latest details of his book, which I've done a early review - a couple of months ago. By the way he is a great presenter, fun to watch and very honest towards the maturity and simplicity of Kubernetes. I really liked statements like the following from his talk - which  show that the people behind pushing kubernetes are pragmatists and not unicorn riders!

It happens that KubeCon 2016, happened in a very intense period of my life, it was only 10 days that I have fully relocated to London, so everything was so.... 'new?' maybe.

Due to my developer background, I was mostly interested on use cases talks, rather than specific technical updates on the framework, which anyway I follow on the github page and the relevant slack channel.

I have to note that, the introduction of  Ingres, Deployments  and deamon sets, were very nice addition to the recent versions - and they are going to simplify the workload of many teams embracing kubernetes. My favorite part of Kubernetes is anyway the combination of Services/ Replication Controllers and load balancers (ingres) and how I can apply it on top of any legacy - statically design deployment.

It was more than obvious, that Kubernetes is picking up on adoption in various and different organizations, we saw examples from the New York Times, the Met Office Informatics Lab and the UK home Office (which by the way has a very impressive github page). Of course we had talks from RedHat which is already embracing Kubernetes through OpenShift. I think it is matter of time, that we are going to see even more examples in future kubecons and then the use cases track is going to be even bigger.
Kubernetes is eventually picking up in the 'local' scene as well, and my bet is that in a year or so the examples and demand for 'related' skills is going to be  higher, I kind of did my own research while job searching here in the UK, and in many companies still the idea of 'orhecstrators or Platforms as a Service' is just an idea, or a research initiative, while many companies still evaluate containers, micro-service based solutions or..they live happy enough leveraging Amazon services :).

The event planning and execution was very nice, so congrats to the conference organizers. The premises of CodeNode in London were more than sufficient for that amount of people and the number of sessions. Maybe as a proposal for future KubeCons in the future is to consider adding some live streams? Also, I would love to see more sessions on use cases but with real 'code' and examples on the specifics of the deployments. In some cases I can understand that this was not possible, for example use cases like the UK home office, could not easily provide specific details. In some other cases a more 'technical' oriented session would be even more useful.

Last but not least, finally I got to get a proper Kubernetes sticker for my laptop!!! Yaay! So go Kube and I trully hope that soon enough I will be able to see kubernetes in my day to day work or projects.