It's been a long time since my last post, for this series of  tutorials. Its time to resume and add new features on our simple project. As I have mentioned in previous posts, this series of posts is targeting mostly Maven and JavaEE7 newcomers, I welcome any questions or comments (and fixes) on the contents below. I promise I will try to keep up with the updates.

Adding a JSF enabled war Maven Module on our ear

Eventually our project structure already featured a war (see sample-web) maven module. So there is no extra module introduced rather than changes on the existing pom.xml files of the parent and the module itself. 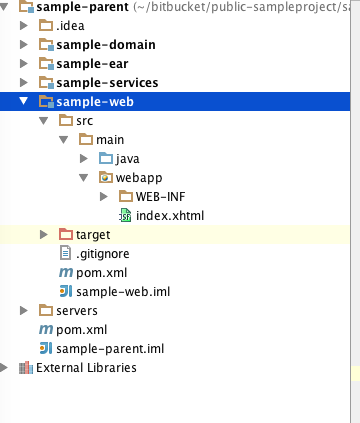 Our  application server is already bundled with the required libraries and settings in order to support applications that make use of the JSF 2.2 specification. Wildfly bundles Mojarra 2.2.8. What we have to do is just update some configuration descriptors (eventually only one). The most important is web.xml which now looks like this.

Step 2 Packaging of war and the skinny war issue

Our war module, is following a packaging scheme called skinny war. Please read the following page from the Apache maven war plugin. To cut a long story short, in order to reduce the overall size of our deploy able (ear), we package all the required libraries under a predefined folder on the ear level, usually is called \lib and we don't include libraries under the war's WEB-INF\lib folder. The only thing you need to do, is add those dependencies of your war to the ear level. Despite the fact that the overall 'hack' does not feel very maven like, it works if you follow the proposed configuration, but there are cases that skinny war packaging wont work. One of these is usually for JSF based JavaEE web applications where the implementation of the JSF widget engine should be packaged within the war's WEB-INF\lib.

For our sample project, I am using the excellent and free Primefaces library, which I highly recommend for your next JSF based project. So I need to define a dependency on my war module for the primefaces jar but by pass the skinny war mechanism only for this jar, so that it is packaged in the right place. This is how we do it.


Step 3 Add some jsf love, a managed bean and an xhtml page with the appropriate tags. 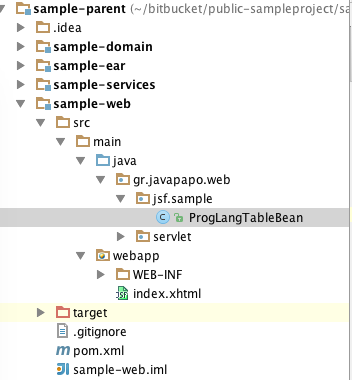 Our code is just a small table, and a couple of tags from Primefaces. If you think that you need to read more about JSF 2.X please have a look on the following links

Step 4 Package and deploy to a running server.

Start your wildfly (you are expected to have one under your project-base dir and the subfolder servers
and then under the sample-parent project type.

You should have your demo JSF 2.2 enabled demo app, on http://localhost:8080/sample-web/ and see something like the following.

That's all, this will give you a simple start in order to expand on something more than a demo!