In the previous post (num 6) we discovered how we can unit test our JPA2 domain model, using Arquillian and Wildfly 8.1 In the previous post we made a simple configuration decision, we used the internal H2 database that is bundled with Wildfly 8.1 and the already configured Datasource (called ExampleDS). But what about a real DBMS? In this post we are going to extend a bit the previous work, use the same principles and

You need to install locally a PostgreSQL RBDMS, my example is based on a server running on localhost and the Database name is papodb.

Eventually we will need to add some more dependencies in our sample-parent (pom). Some of the arem related to Arquillian and specifically the ShrinkWrap Resolvers feature (more on this later).

So our we need to add to the parent pom. xml the following


Some notes on the above change:
Now on the sample-services (pom.xml) , the project that hosts are simple tests, we need to reference some of these dependencies.

In the previous example, our test was simple, we we only used a certain test configuration. That resulted to single test-persistence.xml file and no web.xml file, since we were packaging our test application as a jar. Now we will upgrade our testing archive to a war. War packaging in JavaEE7 has become a first level citizen when it comes to bundling and deploying an enterprise application. The main difference with the previous example is that we would like to keep both the previous settings, meaning test using the internal H2 on wildfly, and the new setting testing towards a real RDBMS server. So we need to maintain 2 set of configuration files, and making use of the Maven Profiles feature, package them accordingly depending our mode. If you are new to Maven make sure to look on the concepts of profiles.

So our test resources (watch out these are under src/test/resources) are now as illustrated below. 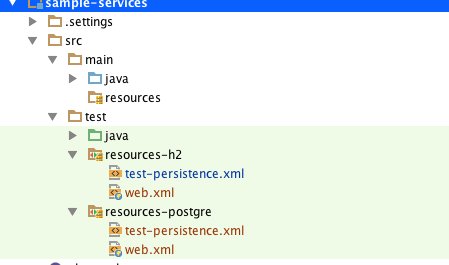 There are differences in both cases. The test-persistence.xml of h2 is pointing to the ExampleDS datasource, where the one on postgre is pointing to a new datasource that we have defined in the web.xml! Please have a look on the actual code, from the git link down below.

This how we define a datasource in web.xml

Notes on the above
This our persistence.xml

Notes on the above

Define the profiles in our pom

In the sample-services pom.xml we add the following section. This our profile definition.

Depending on the profile actived, we instruct Maven to include and work with the xml files under a specific subfolder. So if we apply the following command

Then maven will include the persistence.xml and web.xml under the resource-h2 folder and our tests will make use of the interall H2 DB. If we issue though

Then our test web archive will be packaged with data source definition specific to our local postgresql server.

Eventually our new JUnit test is not very different from the previous one. Here is a screenshot indicating some key points. Some notes on the code above:

We have modified a bit the resources for the H2 profile so that we package the same war structure every time. That means if we run the test using the -Ph2 profile, the web.xml included is empty, because we actually we don't need to define a datasource there, since the datasource is already deployed by Wildfly. The persistence.xml though is different, because in one case the dialect defined is specific to H2 and in the other is specific to Postgre.

You can follow the same principle and add a new resource subfolder, configure a Datasource for another RDBMS eg MySQL, add the appropriate code to fetch the the driver and package it along.

You can get the code for this post on this bitbucket repo-tag.